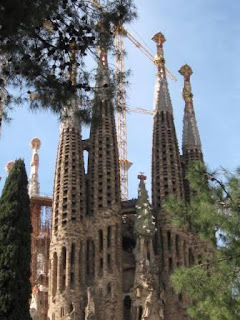 Now don't get me wrong, I like snow and cold weather. I've still got two ski trips planned for this year and I've spent more than my fair share of time wielding ice axe and crampons, but every time I've been out for a run since mid December it's meant wrapping up warm and pulling on the woolly hat and gloves, and the novelty is wearing off. I want to run in the warm again. So after we left home in sub-zero temperatures last Thursday morning to find ourselves four or five hours later eating lunch al fresco under a blue sky watching the boats bob gently up and down in Barcelona harbour, things were definitely looking up.
We spent Friday and Saturday doing the tourist bit with the Picassos, Miros and Gaudis, and put on a pound or two enjoying the wide variety of food and drink that this lovely city has to offer. Late one afternoon we drifted into the Marathon Expo where Jan picked up leaflets selling Brussels in the autumn and Vienna next spring. That's the way it goes you see, I don't get a lot of choice these days, it's a tough life. But there was still a race to be run, or sort of run.............I'm content that my marathon PB stays in the past and I don't run much on the roads these days but I find these big city adventures still have an irresistible charm as a great morning's running, so getting round in good shape without too much stress is the game for me now.
The organisation was efficient but pretty laid back, I turned up at the start area about a half an hour before go to find no-one in the start pens as yet. I went for a wander around then queued for the loo, to find that by the time I got out the gun had gone leaving me very near the back of the 10,000+ field. But who cares, I was here for fun, it was a great morning for running, dry and just the right temperature and everyone around was friendly. The route takes in all the major sights of the city, first going out to the Nou Camp stadium, a poignant one this, I've been a Liverpool supporter since first turning up in the city to start work on a PhD forty years ago, but it looks like it's going to be quite a while before the team gets to places like the Nou Camp again. After that, back to the Placa Espana near the start, along to the Sagrada Familia, out to the east of the city and back along the sea front, finally finishing down the Ramblas to the Columbus Statue and back to the finish in the start area. Lovely streets, easy under foot, hardly any hills, good crowd support, what more could one want.
I threaded gradually through the field at an easy pace, keeping to my now regular marathon tactic of not looking at the watch until half way, which I sidled through in a few minutes under two hours. Come on now, I know this is for fun but it ought at least to be a good training run, so I got my finger out a bit over the second half to finish in an unremarkable but satisfying 3 hours 37 minutes.
After four days of good weather, later on Sunday afternoon it started to rain. Of course it didn't deter us from the post race celebratory night out, but it was still raining the following morning. No problem as most women will tell you, when the going gets tough, the tough go shopping, Jan knew where to go. Breaking through into daylight at lunchtime we were aware that the rain had turned to sleet, and then snow. By early afternoon the streets of this normally sunny city were covered in a couple of inches of damp slush. The urban transport system must leak a bit because the normal fifty minute ride out to the airport took over two hours. It seemed fitting that when we landed back at Liverpool the temperature was about minus two, pretty well exactly what it had been when we left nearly five days earlier.
On Tuesday I made my weekly trip over to Sheffield to see my mum. On descending the Snake Pass I was aware that although the upper reaches of the Ladybower reservoir were still covered in thickish grey ice, the sky was blue, the sun dazzling, and the outside temperature in double figures. Maybe Spring is after all just around the corner.
Posted by Andy Cole at 14:47

Looking forward to catching up at the Hardmoors in just over a week.

Don't do anything silly skiing.

You can feel Spring is trying to poke through here when the sun shines with growing heat, but winter is slow in releasing its grip this year.