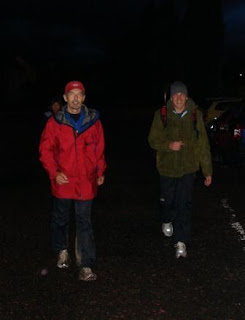 Well there it is. Too long I'm afraid, if you've made it to the end with me, and just my views as I said at the start. I think I'll stay alive during my ultra career, and I sincerely hope everyone else does. Back to running next time, I promise.
WHW Finish 2008, around 3.30am
Posted by Andy Cole at 23:53

Hi Andy, I always read your posts, no matter how long. ;-)

Through the discussion on the WHW board I've come round to the view that whilst some runners could complete without support it would involve an element of luck which is something the organisers can't rely on. I feel that allowing runners to apply to run without crew up until Tyndrum say would be a good compromise in that it would reduce traffic congestion & tired crews but most importantly, nobody should be denied the opportunity to have a full crew if they want it. After Tyndrum all runners would have a crew, the section on which we both agree a crew becomes much more important for runner motivation and safety.

Really good analysis Andy, spot on. I agree with what you say about the 2008 OMM and the media outcry. The same thing would happen if the rules were relaxed on support and there was a problem i.e runners missing or injured (or worse) the organisers would come under so much pressure there would be no more WHW race. Not worth the risk.

Excellent post Andy. I look forward to chatting a bit more about it at the Hardmoors in a few weeks!

Enjoyed your post Andy, although I nearly ran out of food supplies by the end, was dizzy and making poor decisions. :-)

I think you are right, that the unsupported vs supported difference is the wrong one to concentrate on with regards race safety. The more important one is to ask 'how do we make this race as safe as possible?', and take into account the individual characteristics of the race event.