The UTMB and me 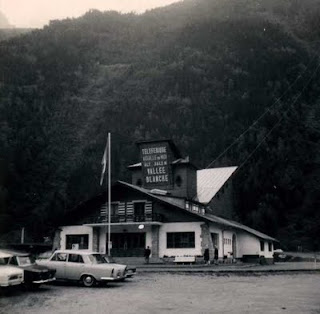 I first went to Chamonix in 1965, hitch-hiking through France for a month or so in the school holidays when that sort of thing was felt to be an adventure (see view of Midi Cableway Station as it was then!). I didn't renew the acquaintanceship until the mid 70's by which time I had become a climber. With a few gaps I've been back at least once a year since, mountaineering, rock climbing, ski-ing, biking, it's a town that has few equals for that sort of fun. We even considered buying a place there a few years ago but never got around to it and nowadays you need serious money to get in even at the very bottom end. So I sort of feel that I know the place.

The Tour du Mont Blanc is a long distance footpath that circles the Mont Blanc range as closely as possible without having to set foot on any permanent snow or ice, traditionally starting and finishing at Les Houches near Chamonix. It's a classic walk, established and waymarked many years ago and you'll find a couple of guidebooks to it in most outdoor shops. But it somehow didn't really interest me compared with the attractions higher up the mountains until my daughter Julia walked it during her school holidays a few years ago (much to our relief at the time the kids tend not to hitch-hike these days, they go by EasyJet..) She came back and raved about it to the ageing parents "You guys ought to go, you'll really enjoy it", so a year or two later Jan and I packed our rucsacs and went, it took us 11 days for the trip, great weather all the way with a good meal, bottle of wine and a comfy bed every night. But one of the things that made the biggest impression on me during the holiday was that as we were in Chamonix getting ready for the off, we witnessed the finish of the "Ultra Trail du Mont Blanc" race. This was in 2005, not quite the party that it is these days, but to see the runners getting back to town on Sunday morning after covering a route following most of the Tour du Mont Blanc route non-stop was pretty inspiring. Although I had only run my first marathon a year earlier, and had not even heard of the ultra running scene at the time, I had to have a go and when we got home I entered for the 2006 race - in those days entry was a fairly leisurely affair and it took several weeks for the maximum number to be reached.

.........but I rationalised that the speed required to complete in the allowed time wasn't too great (just over 2 miles an hour) and I was used to having a couple of days or so in the mountains with almost no sleep. My climbing club did a yearly circuit of the Welsh 3000's as a bit of "Alpine training", and I did a number of similar longish days in the hills before turning up at the start line in Chamonix. Somewhere between arrogant and naive I guess. About 17 hours later I arrived in not quite halfway Courmayeur realising that (a) I wasn't going to go any further that day, and (b) I had an awful lot to learn about this game if I was ever going to complete the event.

So I got into "ultras". I've enjoyed the ride so far, and completed a few now. But the UTMB was always there nagging at me; I entered again in 2008 to feed the rat. This time I knew a few of the competitors and some of us met for a quiet drink in the square a few hours before the start, Mike M, Tomo, Jez, Jim D, Borkur, all looking fit and confident. For me this was going to be different from 2006, I was an ultra-runner now, I'd completed two West Highland Ways, I was going to tick the box, it was just a question of what time I would get around in. The payback for this hubris came at about 2pm the following day in 30 degree heat just short of the Bertoni hut, still not half way in terms of effort required. I ground to a halt, overheated, dehydrated, under-fuelled, finished. I called Jan to tell her I was pulling out, "and" I said, "if I ever say I'm going to try this again, stop me." But we've all been down that road, memory of discomfort fades quickly, a DNF can only be partly filed away, unfinished business demanding later resolution. So I'm back this year.

What have I learned, what's different? Well although its rather obvious it's easy to forget that to crack the UTMB you have to climb a lot of big hills, so training only on runnable trails isn't going to pay off unless you're exceptionally talented. So I've put in the miles this year but also walked a lot of ascent, about 200,000 feet since January, I hope it's enough, but it's taken time. I talked to Hugh after the Wuthering Hike, he completed the UTMB last year but wouldn't go again for a while "too much time commitment for training", I know what he means. Secondly, I will approach the event with determination but a lot more humility - 45 hours plus will do fine (the cut-off is 46); in particular I think in this event more than most the average performer needs to start slowly or the climbs just kill you off early on, I'll try to stay just ahead of the cut-offs until at least half way. Finally, although I've read of people doing this with minimal food, I'm sure to give yourself a chance you have to stay focussed enough to keep the food and drink going in, and not get distracted by times, other people, or other stuff going on. So that's my plan.........watch this space.

I'm off to Scotland tomorrow night for Saturday's "Devil of the Highlands" run (Tyndrum to Fort William, 42 miles), which will be my last long outing before the UTMB three weeks later. After that I'm telling myself to take it fairly easy for three weeks, should be enough miles in the bank by now, just try to stay uninjured and avoid the swine flu!
Posted by Andy Cole at 19:24

I really hope you do it this year. You have done the time, worked hard in your preparation and have the experience to know what it takes.

Have a good journey up tomorrow and I look forward to seeing you bright and early at Tyndrum on Saturday.

The sheer ascent will be a bit of an experiment for me, but the bit I like most about any race is going uphill. I felt strong in the half Bobby Gee I did recently and could have gone on that day easily.

Let's see what the race brings.

See you in Chamonix in a few weeks time. :-)