Cut off in one's prime

Cutoffs. If you're up at the front of the field they have no relevance to you. But if you're near the back they might dictate your whole race strategy. So what are cutoffs all about?

I was up in the Lakes on Tuesday and managed to turn my ankle on an innocuous-looking bit of rocky path alongside a wall, so I've spent the last few days enjoying some rest, ice, beer and the Tour de France. I seem to be able to walk without limping again today so I should be OK for the start of the Lakeland 100 in a couple of weeks time. That's what I was doing in Cumbria; in my "year of running extremely slowly" I was trying to get a feeling for the pace required to "just" make the Buttermere cutoff 26 miles into the race. As it turned out, I had covered enough ground before my mishap to conclude that doing these 26 miles in the 10 hours allowed is pretty straightforward, and I'll probably shoot for a 9 hour schedule on the day.

A bit of a contrast to last month when I was preparing for the West Highland Way Race. I hadn't done any real running in preparation but I'd walked a lot, so I was confident I could do the 95 miles in the 35 hours allowed, but only if I could make it through the first cutoff  -  19 miles in 5 hours. That's nearly four miles an hour, and if you throw in the few hills involved including several hundred feet over Conic Hill, it can't be done without a reasonable amount of running or jogging at the very least.  Well, it worked out OK on the day (or night, as the race starts at 1am!) but these two different experiences set me thinking about how and why cutoffs are set. I started by comparing the cutoffs in four fairly well-known "100 mile" events, the two already mentioned, the Hardmoors 110 and the UTMB. 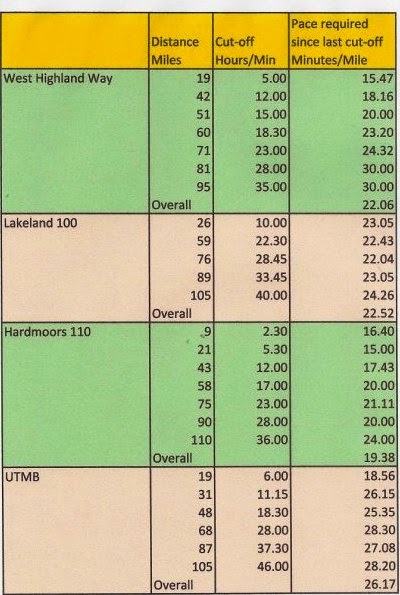 I think the table is more or less self-explanatory, I've just calculated the pace that you need to maintain to reach the next cutoff in time, having just made the previous one.  I've missed some of the intermediate cutoffs out in the UTMB (because there are so many), and I've also added the overall pace you would need to maintain to meet the overall time allowance for the event if there were no intermediate cutoffs.

What you notice is that in the Lakeland 100, at no stage do you have to move more than about 5% faster than the overall average pace. In the Hardmoors you have to make average plus 20% up to mile 21, and in both the West Highland Way and the UTMB the first 19 miles have to be covered at 40% above the average required for the whole distance. So what are the reasons for this high pace requirement at the start in these two races?

Before I start trying to tease this out, I'll preface it by saying that I recognise the absolute right of race organisers to set whatever rules they want. I'm grateful that they put in so much work so that we participants can have some fun at a weekend. I'm just interested in the thinking behind some of these rules.

So far as I can understand, there are two main reasons given for tight early cutoffs. The first is that the experience of the organisers and results from previous races show that if a runner can't make these times then he is unlikely to finish within the overall allowance. It's tempting to say that this is just observing what runners do rather than what they should do  -  most people start out too fast and slow down too much so that's how the race ought to be run. But I think there's a bit of history in play here. For example, if you look at the results of the West Highland Way Race for 2004 you'll see that of the 73 finishers, 3 finished in under 20 hours and 25 in under 24 hours; compare this with the 2014 race when of the 157 finishers, 22 finished in under 20 hours and 74 in under 24. And yet if you look at the split times for Balmaha (19 miles in, with a 5 hour cutoff), they show a remarkably similar average for both years. So what is happening here is that runners nowadays are running much more even-paced races than they did a decade ago. This is hardly surprising, as this is the decade in which ultra running has moved from a fringe sport to one enjoyed by hundreds of people every weekend. More participants means more sharing of good information, runners being better prepared and trained, and running strategically better races by not taking too much out of themselves early on. Running the first half of a race and walking the second half was probably seen as normal for a high proportion of the field in the past, whereas I think now it would just be seen as starting too fast for one's level of fitness. Ask any runner who has done both which they would rather do - finish the final miles feeling strong and at a pace similar to what they were doing in the first half of the race, or toughing it out at a slow walk because they're too exhausted to do anything else. One thing that I'm really convinced of is that if you are capable of doing the distance there will be a pace that you can maintain throughout, and that will get you your best result. In one of my most satisfying ultras, the Tor des Geants, the very first climb was 1300m vertical which took me two and three quarter hours. Over 200 hundred miles and 20,000m of ascent later, the final climb was 1300m vertical and took two and three quarter hours. So I believe that tight early cutoffs reflect how ultra races used to be run, rather than how they are run now. A relatively new event like the Lakeland 100 has grown up assuming competitors will have a more  even-paced strategy if they want to be successful, and the more evenly balanced cutoffs reflect this. The event may still be too tough for an individual runner, but it's much easier to live with that knowledge than feeling that you could have completed it in the same time under different rules.

When you look at the actual numbers that are "timed out" by missing cutoffs, it is actually very few, just a handful in the UK races, though maybe up to 10% in the UTMB. But this doesn't count those who have to work much harder than they would have wanted to early in the event to avoid being timed out, and who end up paying for this later. This effect is worsened by the fact that sailing too close to the wind is quite stressful so runners are likely to set their pace to meet the cutoff with something to spare to allow for something going wrong  - a bit of bad navigation, having to deal with clothing or equipment malfunctions, etc  - which increases the pace that they need to set to be "safe".

The other reason I have seen for unbalanced cutoffs is so that competitors have to "run" some of the race as opposed to walking all of it, because the race in question is a running race and walking the whole thing is against the spirit of the event. I can buy into that but it can also lead to the other extreme of competitors running quickly between checkpoints then having long rests later in the event when they have built up a "cushion". Some events such as the Grand Union Canal Race and I think the LDWA Hundreds combat this by setting maximum times that you are allowed to stop at checkpoints, but this is then another "rule" for the race. So you can wind up a long way from the original challenge of "get from A to B in 40 hours" to "get from A to B in 40 hours, but you must be at C in 5 hours and you mustn't stop more than 1 hour anywhere and......" if you see what I mean.

So as I said in a post a year or two back when I asked the question "What makes a race tough?", the answer is of course the guy who sets the rules. And if you don't like them, do another race!

Really interesting analysis, I do hope that race organizers read it.

My own approach to pacing is to aim for as even effort level as I can throughout the race. So far it's worked well for me both in terms of enjoyment of the race and consistency of achieving good times.

We aren't the only ones finding value in starting steady - this years West Highland Way Race finishers on average ran a stronger second half/first half ratio than last years. I haven't analysed over many years but given what you've written in this post it looks to be just part of long term trend of better pacing.

Just before the WHWR race I wrote a blog post of different splits for the race, from average 2013 splits through to a even first/half splits.

A competitor aiming for even effort level and a 35hr time would have to run over an hour quicker over the first 20 miles just to squeeze in before the cutoff. This has to increase the chance of slowing more and failing to finish within the 35hr cutoff.

A competitor using even effort level would did just squeeze in under the 5hr cutoff would actually go on to finish in roughly 28hrs.

If I were to arrange a big ultra I'd go for more lenient early cutoffs than the current WHWR cutoffs. Whether to use the even effort level splits is something I'm not yet convinced about as so few tail enders come close to it, but perhaps the big positive splits of tail enders could be partly due to tight early cutoffs.