On Yer Bike! (a cautionary tale of serial incompetence)

I don't get injuries. Well, not strictly true, back in the days when my ski-ing and mountaineering were more adventurous I did have the odd excursion away from the intended course leading to some sharp contacts with nature, but nothing resulting from overuse, a word I wasn't really aware of at the time. And now I have mellowed into jogging round the hills occasionally and rock climbing only when the weather is supportive, I wasn't expecting to get hurt. But I had had what seemed like a hard summer with a couple of disappointing DNF's and my joints and muscles seemed to be protesting a bit more than usual, so I cheered myself up with an encouraging performance in the Lakeland Ultimate Trails 100k in mid September then decided on a month off for a bit of R&R.

After the month off I started running again. I was disappointed to find that the rest had done nothing for my knees so I went back to the knee man and had them both scanned. Nothing major since the previous look-see three years ago but everything had just got a bit worse, displaced bits of cartilege from over-rotation of my right knee due to a ruptured ACL, increasing  tendonitis in both patella areas, a bit of bone degeneration, etc,etc. Probably does you as much good to carry on running as to stop was the general verdict, it's just that it's going to hurt a bit more. We talked about a bit more surgery, I said I would hang on another year or two and take some paracetamol.

I started running again too fast, too soon. I pulled a calf muscle so went back to the physio. No running for three weeks, just massage, stretching, and a bit of walking. She passed me off as good to go, with the proviso to take it easy. I tried. I jogged round the local forest at barely five miles an hour. The calf started hurting after a mile and I limped back. Another week off then a determination to start even more easily. Walk three miles with 5 minutes jogging. Walk three miles with 6 minutes jogging.  It was sort of working but every time I felt I was getting somewhere the pain nudged me back a notch.

Last week I was still contemplating the Tour de Helvellyn, a great outing on the cards just before Christmas, 38 miles through the normally wintry Lake District. I was trying unsuccessfully to convince myself that I could probably get round by walking most of it when the problem resolved itself at a stroke. Jumping off a bouldering problem at the local climbing wall, I landed badly on my unstable knee with the result that I could then barely walk. Five days later the swelling has nearly gone down and I can make the limp almost undetectable if I concentrate. But I think that's the full stop for the year, I'll concentrate on getting going again for 2014.

The moral of this little saga  -  well, until I decided to have a rest I was going OK, I'd just done 66 hilly miles around the Lake District  -  so I'm left to reflect that "if it aint broke, don't try and fix it!" The picture below of my mileage from the start of the year until the end of November for the past five years tells the sad story of autumn 2013. 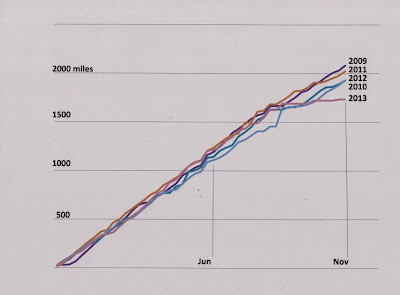 But there is always something that you can play at. I decided to join in a climbing club meet going night mountain biking at one of the forest venues near us in North Wales. It was a whole new experience for me, I hadn't had my bike out for a couple of years but I reasoned that you can normally ride a bike even if you can't walk so well, and at the place we went to you can rent a powerful headlamp for the evening. After that, it's just like running through the hills in the dark, except that everything happens a bit faster.........I think it will keep me interested and maybe even help to stay marginally fit until I can go running again.

We all need some none running time. I've had 7 weeks off to get over this year's exertions. Hope a good rest gets you up and running ready to hit the trails again next year.