Pacing and the Lakeland 100

With the Lakeland 100 coming up in two weeks I thought I'd better re-familiarise myself with bits of the course that I haven't seen for a couple of years, particularly those done in the dark, so yesterday morning I got myself up early to be parking in Coniston at 6.30am ready for a long and probably hot day.

It's surprising how much the countryside changes, or is managed, over a period of two years. The old rocky defiles of the Walna Scar Road have been filled in to make it almost motorway-smooth and the deforestation around Grassguards Farm has changed its appearance completely  - and the new forestry road there has helped dry out the very boggy section to our advantage! Even the minor details change over time. The first time I reccied the route back in 2009, the final turn up to Sail Pass before Braithwaite was so obscure that I missed it and had to go back. Then it grew a cairn, now the cairn has got big enough to fall over and the "turn" is quite clearly the most-used path at the junction  -  the Lakeland 100 is creating its own trails, as the Bob Graham has done over the years. Well, the day was as hot as predicted, so I walked anything that smelled of uphill and jogged the rest at a very modest pace, and eventually arrived at Braithwaite after nine and a half hours on the go. Good enough. A quick ramble from Ambleside to Coniston next week to remember the fell after Tiberthwaite and I'll be good to go. I ran this in the Lakeland 50 last year but just made it to the finish in daylight, and things change in the dark.

So I started putting together some sort of plan for the race. Now the Lakeland 100 is quite a gnarly event, not to be taken lightly, and a certain amount of unpleasantness ensues if you get it wrong. By my own rule of thumb I should be able to get round in about 30 hours (3x Lakeland 50 time), but my ambition this year is for a completion in good shape, in whatever time it takes - I don't want a long recovery period afterwards with the UTMB coming up 5 weeks later. Allow a few hours spare for the wheels to come off occasionally and this means I'm targeting 35 hours. In any case my record in this event isn't great; in 2010 I stopped at Ambleside, by that stage going too slowly to complete in the 40 hours, and in 2011 I finished in 37:39 having had to stop for a longish sleep at Kentmere, so a 35 hour plan seems sensible. 35 hours is an average of 3 miles an hour start to finish, including stops. Over the years, I've come to the conclusion that the strategy for completing this race and enjoying most of it (we do this for fun remember) has two key elements:

1. Get to Braithwaite feeling good. By here, you've all the really tough stuff behind you but it's still only one third distance. If you're feeling bad by here, the rest is going to hurt quite a lot.

2. Don't waste energy early on running in places where you should walk. There is a lot of easy ground in the middle and later parts of the course, and having to walk this at three miles an hour or less is a great way to ruin your overall average.

So I put together an initial plan which sees me at Seathwaite in 1.45, Wasdale Head in 5 hours, and Braithwaite in 10 hours, and so on. Out of interest, I then checked this against Nick Smith's time split predictor based on the 2010 race actual finishes  -  http://climbers.net/race/Lakeland100-2010. What I found was a bit of a shock. Plugging a 35 hour target  into Nick's model told me I should be at Seathwaite in 1.21  and Braithwaite in 8.31 -  suicidally fast according to my thinking. But there are two linked factors at play here, both coming from the way that Nick has constructed the model (don't get me wrong, this is not a criticism, it's a great and fascinating tool, you just have to understand the way that it works).

The figures are based on the times that runners actually took in the 2010 event. I looked a bit closer at the sensitivity of the target time, and a very abbreviated spread is shown below:

You can see for example that if you target a 33 hour finish the model tells you to start much more conservatively than for 35 hours. What happened is that the 35 hour result was skewed by two competitors in particular who started out at the model's 30 hour pace then "blew up" and finished very slowly indeed. So if you use this model to have a go at planning your race, check the sensitivities on either side of your target before you go firm on a plan.

But the second and more important point is that the model reflects what runners actually did, and not perhaps what they ought to have done. My stake in the ground here is that I believe that the majority of runners, and especially middle to back of pack performers, start far too fast when competing in long distance events. It may appear that I'm diametrically opposed to Stuart Mills here (we've had some debates about it!) but I don't think I am. A couple of points to think about:

1. I've analysed the results of a lot of races over the past few years, and one very consistent trend that comes out is that over the course of a race, slower performers slow down significantly more than faster ones. The good guys keep running all the runnable bits, they just go slower. The weaker performers are walking everything way before the end. Now assuming that you are unlikely to walk at much faster than a 15 minute mile pace, whereas even a slow jog gets you 12 minute miles on level ground or downhill, being able to run the runnable stuff for as long into the event as possible pays huge dividends. To do this you need to conserve your energy early on, not run uphills at a marginally faster rate than you could walk them.

2. As everyone says, overall performance in ultras, and particularly how you fare when you have a few miles already done, is largely governed by your mental attitude. How do you stay feeling good, and therefore focussed on the task in hand. Some runners (most likely near the front) will get this from feeling competitively successful, beating their peers, having a chance to win and so on. I know people who feel good so long as they are ahead of their plan, beating their splits  - a danger here of course is that if you fall behind your plan the motivation takes a big knock. After well over 50 marathons and ultras in the past few years I know what keeps me going - I like to feel, until the finish is comfortably in sight, that I have "something in hand", I could go faster if I chose but I'm taking it easy. You only get this by starting conservatively. I've done races where it hurt from a quarter of the way in; I don't like it and I try to not let it happen these days - if things start to feel tough I slow down, have a rest, get it sorted now rather than hanging on hoping that things will improve. I've done marathons with both negative and positive splits; we could argue forever over which gets you the fastest time on the day, but I know which ones feel better, the ones where you're accelerating to the finish rather than desperately hanging on. Of course everyone slows down in an ultra, but it's the perceived effort that's the key. When you're 50 miles in, does it still feel fun? Remember, we're not talking here about winning the race or getting your absolute best time, we're talking about finishing the event successfully and in good shape.

So as we set out on the 26th July, I'm expecting to be one of the last to reach Seathwaite. But I'm also hoping to be able to run the newly-surfaced Garburn Road down to Troutbeck a few (!) hours later. If you're interested this is my plan: 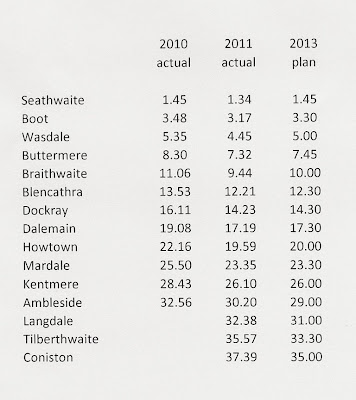 But I have a number of ex-military friends who say that the only thing that you can guarantee about a plan is that it never survives the first contact with the enemy.
Posted by Andy Cole at 20:38

Good luck Andy. I'll be watching to see how it all goes. Ian (B)

Andy, great blog, and completely in line with my analysis/planning. My stretch target is 35, and I'm also planning on 1:45 to CP1. I looked at the split calculator, blinked several times, and came to the same conclusion. It's based on performances that shouldn't be aspired to (in most cases)

Thought provoking as ever. With regard to pacing, we are both batting on the same wicket (to be topical) - take a look at my early splits from last year. I kept thinking about all the sections in the later stages that I wanted to run, not walk.
Best of luck. I hope to be down to watch the start.

I actually compared Dave T's splits from last year with the calculator and realised it was a little more biased to runners who like to get ahead start :-) Phew! As I had a mild panic when I put in my dream time and saw the split to Buttermere. Still, it's a helpful tool. Especially to newbees like me :-) See you next Friday! Dx

Great blog. Mind , if its forecast a very hot day i'd be tempted to make more time up during the night knowing i'd probably slow in the heat.

Good luck. Its some Challenge that. My mates having a go at it for the 1st time.