I enjoyed 2012.  Some things didn't go exactly to plan, but overall it was a pretty good year. First the statistics:

I ran a total of 2119 miles, roughly the same as in the preceding two or three years, although you have to interpret the term "ran" fairly generously, as a lot of the miles were fairly slow progress over hilly ground. This is clear when I split the total into my normal categories:


I went out 168 times, an average of just over 3 times a week, making my average length of outing 12,6 miles. This  straight average hides a lot of detail though; I did regular 6-7 mile runs and a lot of longer stuff; I covered 20 miles or more on 24 occasions.

Out of the total, 514 miles were done in races.


An additional figure this year, because I was concentrating on hillier events I trained accordingly, so over the year I managed just under 350,000 feet of ascent.

Some of the averages were skewed by a couple of setbacks causing some "time out" which I'll come to.


Now the races. I kicked off with the Hardmoors 55 which took place mid March in pretty good conditions so I was hoping for a PB. Unfortunately I had a fall about 15 miles in, which I later discovered had cracked a couple of ribs. It hurt a fair bit on the day, but enthusiasm and adrenalin normally keeps you going; I got within a couple of minutes of my previous best but was pretty drained at the finish, more than normal after a race, and found I couldn't do anything energetic for a month afterwards.

This left me a bit short of sharpness for the Highland Fling at the end of April, but I did manage to contrive a PB here. It was rather a cheat though as it was only by a minute or so and my previous best was to the old finish at least two or three minutes further on. Still, it's in the records so I'll accept it. I managed to retain my MV60 title for a third year, but I'm expecting a far tougher test in 2013 because two runners far more competent than me in the shape of Tony Thistlethwaite and the Magnificent Murdo have now joined the gentlemen's class.


The West Highland Way was wet for the second year running, only this time a bit more so. I realised quite early on that a good performance was very unlikely so I trundled to the finish in a fairly mediocre time (all my times for this year's events are shown in the panel on the right), trying to avoid getting too knocked about by the conditions  -  damage limitation if you like. Hopefully, we're due a good one in 2013. The plus side was that another Goblet appeared at the finish, making six for me now.

I entered the Lakeland 50 just to keep a bit of focus between the West Highland Way and the Tor des Geants, my main focus for the year which wasn't until the second week in September, so I started with the idea that it was a well supported training run in good company. On the day I had one of those outings where everything goes right. I had thought of somewhere near 12 hours but finished in just under 10 in 35th place, possibly my best ultra result ever.

And so to the Tor des Geants, which looked to be a wonderful though quite daunting adventure, which is what it proved to be. Enthusiasm carried me through the first day, I had a bit of a low point on the second, then got my act together and enjoyed every minute to the finish, which for me came five and a half days after the start, after a diet of the equivalent of three Ben Nevis's  and two hours sleep per twenty four hours.  I doubt if I'll ever do another event like it.

Home from Italy and I had an appointment with the surgeon to sort out two inguinal hernias that had been causing me a bit of a problem for two or three years, so another bit of downtime. It was a keyhole operation though, so four and a half weeks later I was able to jog slowly around the Glen Ogle 33, a nice run on a fairly flat but quite scenic course on what turned out to be a lovely autumn day, meeting some old friends along the way.

Back into some training and the year was rounded off with the Tour de Helvellyn, an event fast becoming a classic of the calendar. I had a non-stressful but sound run, feeling that I was back in the game again and looking forward to 2013.

Alongside the events, another project sidled into my life this year. When I knew I had a place in the Tor des Geants, I also knew that I needed to do a lot of walking up hills and running down them to have any sort of chance of completing the course. I really didn't fancy doing laps on Snowdon or Skiddaw so I decided to train by doing the Wainwrights. By the time the TdG came round they had got me fit enough, but they had also got me hooked, so I decided to carry on and complete them. I had hoped to get them finished in 2012 but other distractions got a bit in the way, and by the end of the year I had completed 189 tops in 24 outings, leaving me 25 still to do. I've decided that my new target will be to complete them in 12 months, and as my first trip was on 6th March 2012, that looks like being OK. It's been fascinating going to areas of the Lake District that I otherwise would never have considered - some have been outstandingly charming and others I won't bother to visit again! 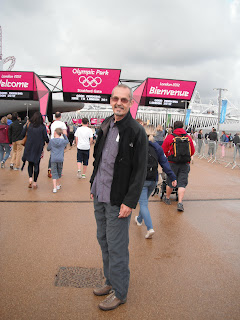 And what else happened in 2012? Well, Jan and I became grandparents for the first time, a long-awaited joy for us,  we went to the London Olympics, a truly once -in -a lifetime experience, and I finally got around to completing a project that I had been daydreaming about for years, I built a Caterham 7. 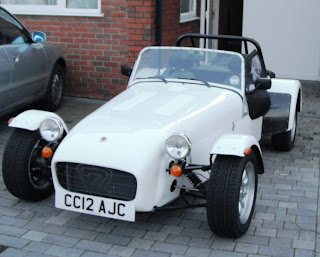 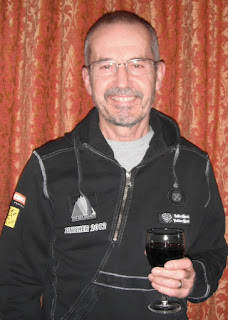 Well done, Andy; the glass sure is half full, and more. Both literally and metaphorically! Hope all cointinues A1 fine for you for 2013
Is the Caterham 7 your WHW support vehicle???

Well done. You are an inspiration to us all!

I want to be like you when I grow up!

How did you fit it all in?