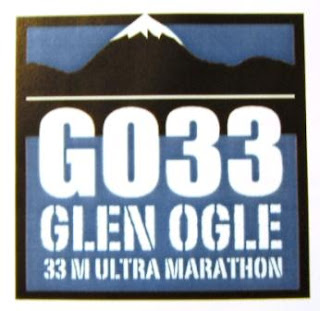 I hadn't done anything that you could actually call running since the Lakeland 50 back in July; for the six weeks up to and including the Tor des Geants I just walked up and down a lot of hills. Then, as I said at the start of my last post, I got back from my little Italian adventure just after the middle of September, idled around for a couple of weeks, then had some hernias repaired. Three and a half weeks later sees me in the signing off consultation with the surgeon....

"How's it feeling then?"
"OK, still a bit sore at times but I'd like to get into a bit more activity. Anything against that?"
"It all looks fine to me. You're not going to do any damage now so go for it. Tried any running yet?"
"Two or three gentle attempts. Did six or seven miles at about 10 minute mile pace yesterday."
"Got any events planned?"
(pause) "Yes, one in eight days time actually."
"What sort of distance?"
" Er, about thirty miles, but I think it's a fairly gentle course, no hills or anything.....and I'll probably walk quite a lot."
(raised eyebrow) "Well, I suppose that's just a spin around the block for you guys (he knows about my extra-curricular activities). Marathon's far enough for me. Good luck then."

The following day I shuffle round a half marathon distance in just under two hours. The last couple of miles are very slow and hurt a bit but it gets done. Seven days to the race. Four runs in the last ten weeks. Bit daft to go really but you have to start again somewhere. I decide to believe Stuart Mills that it's mostly down to what's going on in your head and the miles in the bank over the years. Hell, Dave the Pirate would probably consider me overtrained. It will probably be OK.

I normally run the Round Rotherham 50 miler at this time of year but the date clashed with a family event so I'd entered the Glen Ogle 33 back in the summer, and it seems to have worked out fine. I'd never have got round 50 miles of muddy fields and stiles in my current state but 33 miles of cycle track sounds a bit more possible and I've heard that it's a pretty course so I'm looking forward to the day. Definitely no heroics though, a bit of R&R in some fine countryside.

The Lake District is on the way so I stop off on Friday to walk 12 miles over the fells, collecting another four Wainwrights, one of this year's projects. The cold has arrived and the weather varies from hail to rain to bright sunshine, with a good covering of snow on the higher tops. Fun but probably unwise in view of tomorrow's activity, still that's how it is. Then all the way up the motorway in the dark it's a clear cold evening, lots of stars. I get to the pub in Callander in time for a meal, beer, a small whisky and some sleep.

I creep out of the front door at 6.30am Saturday to be met by heavy rain. It doesn't improve on the short drive up to Strathyre, it just turns to sleet. The car thermometer says it's 1,5 degrees outside. I arrive at the campsite for race registration and park in a waterlogged field alongside a flooded road. Still time left so I leave the engine running and wait for it to get light. As it does, the rain magically stops and we don't see any more all day. I check in, meet a few people I know who are either running or marshalling then in no time it's 8 o'clock and we're away. About 150 starters, which must leave a few disappointed people on the reserve list because the event closed out at 200 entrants  -  50 must have had second thoughts in the day or two before the race!

The course is nicely laid out. A 4 mile section along forestry roads, with a hill at the start, leads to Checkpoint 1 back down in the valley base. From here you follow the cycle way along Glen Ogle for 8 miles, gently undulating at first, then up a short sharp hill to a section along an old railway track with nice views, gradually climbing (someone said it's a steady 1 in 80) to a road crossing at the highpoint and Checkpoint 2. Then an 8 mile forest loop with a long steady downhill and an equally long steady uphill back to Checkpoint 2 (which now becomes Checkpoint 3), back down the cycle way to Checkpoint 4 (same place as Checkpoint 1), then a final 5 miles of country road with a little climb at the end, back to the finish.

I walk all of the first hill. In fact my plan is to walk all of the hills, at least until Checkpoint 3. I start to jog slowly as the ground levels out and feel a tap on the shoulder. It's Bob Allison who I haven't seen since the start of the West Highland Way in June. He's also determined to have an easy day, having not done much since completing the Grand Raid Pyrenees back in the summer, so we share the next 20 miles or so, chatting about this and that, walking the ups and whenever we feel like a break and jogging the rest. The weather gets progressively better as the day goes on, though it stays cold.  Two layers plus hat and gloves for me, can't imagine how the teeshirt and shorts guys manage to stay warm  - put a bit more effort in I suppose. After the top forest loop, as we arrive back at Checkpoint 3, the sun comes out making the views on the way back quite splendid as the higher ground is covered in fresh snow.

So far, by taking it really easily, I'm feeling fine and enjoying the day and by now I'm happy that I'll get round without too much damage.  After the sharp drop on the cycle way we drift into a walk a bit run a bit sort of cycle, but Bob's pace is a little quick for me on the run and I don't need to walk so I say bye for now and push on while he's walking. I expect him to catch up but he doesn't. Still, our different strategies work fine for each of us as he finishes within 5 minutes of me at the end.

The last bit of cycle way and the start of the road go fine. A mile or so along the road I pass Fiona who has slowed to take photos of a horse in the roadside field, then over a little bridge which marks the turn for home. A cyclist tells me that he's just come from the finish and I have 3,4 miles left to go, a bit disappointing as I thought it was under 3 and things are starting to hurt a bit now. My jog slows down to not much more than a walk, and although I'd been running the uphills on the road as far as here there isn't going to be any more of that. The area of muscle around where the patches were put in seems to stiffen up completely, I've probably gone far enough. I have some painkillers in the bag but decide I'll tough it out as it's now less than 2 miles to the end. A final hill, up and down, then over a rickety bridge to the finish. I shuffle in just over 5hrs 45mins from the start, in 94th place. Not my greatest performance ever but a satisfying enough return to the trails.

I'm tempted to go to the pub for soup and beer, but I'm feeling pretty stiff and sore and I have a feeling that any delay is likely to lead to a long sleep in a motorway service station on the way home.  I say cheerio and get going while I still can. A strong coffee just beyond Glasgow sees me through to Chester in time for dinner at just after seven o'clock. Many thanks to the organisers, marshals and other runners I met along the way for ensuring a lovely autumn day out.

Good to see you in your cap, mate. I was pretty close to you and Bob up to checkpoint 2 which worried me somewhat because I was out to record a finish only. My walk-walk strategy from about 28 miles put a healthy distance between us though :-)

Well done Andy. Great to hear that all seems wel on the recovery