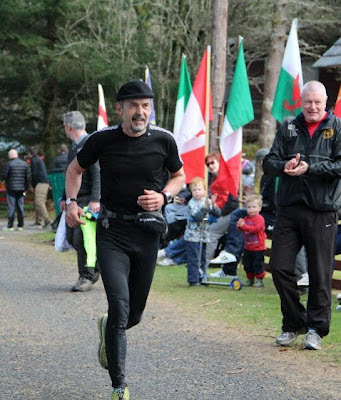 Four days before the Fling I realised I needed some new shoes. The treads on my Hoka Mafates, which I had long known were looking a bit the worse for wear, started to break up big time. Looking back over the diary it seems that they had run up around 700 miles so I couldn't really complain. The problem was that I didn't have time to go to anywhere that stocks them, and to add a bit more complication I thought I would try a different Hoka model, the Evo Stinson, for a change. A quick check on the internet revealed that the Climbers Shop in Ambleside had one pair left in what I thought was my size, so I got on the phone to them. Was the sizing the same as for the Mafates? Don't know, said the guy on the other end, but I'm the same size as you, I'll go and try them both. A few minutes later he called back; they seem the same to me he said, so they were in the post. I took them out of the box and ran 53 miles in them; they're magic.

With three quarters of the UK locked in to continuous downpours, it was great to drive up to Tyndrum on Friday morning in ever improving weather. The car was left strategically near the finish for an immediate post-race nap (we senior citizens need this sort of thing), and the train caught for Milnagavie in company with Mark and Helen Leggett who had the same plan - apart from the nap I assume. It was turning into a beautiful sunny afternoon, with promise of more of the same for the morrow.

I had no great hopes or plans for the race as I had been out of action for a while recently and turned up with a lot fewer miles than I usually have in the bank at this time of year. Just go out and enjoy it and don't get too trashed. I was confident I could get the distance OK but the time might not be spectacular.

Gathering for the early start with the "auld men and lassies" on a cool, clear morning in the station yard, it was good to catch up with so many people I only see once or twice a year, including George and Karen who had just arrived having run down the course from Tyndrum through the night. Then it was the traditional Fling one-line briefing from the new Race Director John Duncan and we were off. I settled down near the back, deciding to take it very easily to Rowardennan (and then slow down.......). I ran most of the section to Drymen with Graeme Morrison (and dog Penny, on her 4th Fling) and Keith from Ambleside with whom I chatted about the Lakeland 100 which he is running later this year. They got a bit ahead as I walked for a drink break just before the checkpoint, so I trundled into Drymen on my own in 208th place (thanks to John K for the post race stats).

I passed quite a few people on the next stretch through the (now almost treeless) Garabhan forest, because I'm happy to keep running gently here while a lot of runners adopt a walk/run strategy. Going up Conic hill I heard my first cuckoo of the year, then it was a quick clatter down the other side and on to Murdo and the drop bags. I probably wasted too much time at the checkpoints this year, but it was a nice day to linger over a rice pudding or two.

It's always a surprise that after seeing so many runners before Balmaha, you can run the rest of the course pretty well on your own, and this year was no exception. But on the bit alongside the road a car slowed down and I heard a hi Andy - it was Debbie and Marco, here supporting Thomas. Thomas himself stormed past me in the last bit of wood before Rowardennan, the first of the 7 o'clock starters by a long way. I was feeling OK by Rowardennan and decided I should put a bit of effort in, so I ran all the way to the single track. A half mile or so before Inversnaid I was caught by Andy Johns, also a 7am starter. I managed to keep him in sight until we reached the hotel, but then had another five minutes for a picnic because it was so nice just being there.

I think I was slower than I should have been along the technical bit after Inversnaid, not sure why but it seemed to go on a bit this time, but then I was happy enough on the climb at the end of the loch. Just before the summit I heard faster feet behind me again, and pulled over so the two leaders of the 8am start could get past. Ludo Pommeret was in the lead, but Scott Bradley (the eventual winner) was barely thirty yards behind and looking much more comfortable. A bit further on, maybe half a mile from Beinn Glas, I caught up with Keith Hughes who, not being able to run because of an injury, was walking the route and had started from Milngavie at midnight. I walked with him for a few minutes, then pressed on to the last checkpoint at Beinn Glas.

I arrived at Beinn Glas in 7hrs 43min. I knew that last year I was here in 7:39 and went on to a 10:18 finish. So I wasn't going to break any records, but I was pretty pleased in the circumstances and was still feeling good. Had a brief chat here with Neil MacRitchie on medical duty rather than running this year, then set off up the hills to Derrydaroch. This bit went fine, but after the farm I suddenly felt the lack of miles in the legs this year, and slowed badly over the next mile or two up to the level track above the main road. I never really enjoy the forest switchbacks on the Fling, much better on the West Highland Way race when you're going so much slower, but I can remember how they unfold now and it didn't seem too long before the WHW sign showed up signalling the last ascent. I enjoyed the long descent down to the road, then across to where you know it's just three flat miles to the finish. A glance at the watch showed that if I could get a bit under 9 minute miles from here to the finish, then a sub 10 hours was possible. I tried for half a mile or so but it was really hard work and I accepted I wouldn't keep it up. A bit of a motivation dip after this, but then I reasoned that I was still having a good day so I picked up a bit for the rest of the way. On the bit by the river Ritchie came smoothly past, on his way to a finish in just over 8 hours. Then I was soon at the big gate, back to the river again and could hear the sound of the piper. George and Karen welcoming just before the finish, then I was done. 10 hours 9minutes 48 seconds, 76th out of 362 finishers. Officially a PB, but a bit of a fraud as my previous best was only a minute slower to the old finish line. Still, it's in the book and I'll take it.

Time for one of the best beers of the year, my hour's sleep in the car, then back to the finish for the chat with those that have finished and to welcome those still coming in. As an ultra finish the convivial scene at the end of the Fling takes a bit of beating.

I've now run the Fling 6 times, and my last 4 finishes are all within a 14 minute time band. Consistency or complacency? Not that it matters, really, still a great day out, thanks to John D and all his helpers for making it happen.
Posted by Andy Cole at 00:21

Another great Fling Andy. Well done and enjoyed your report as always.

I would say consistent!

Great run Andy, though are you not tempted to write "SWAG" on your bumbag to complete your race costume? It was good to chat to you at the finish - see you in June.

I'm gonna get one of them hats if it helps you perform like that. Well done mate.

Well done Andy, well done, I would say consistent too!

A wise man once said "Don't try anything new in an ultra race. Ever!"
but here I read "I thought I would try a different Hoka model, the Evo Stinson, for a change"
But enough said ;-)

Anyway you looked very comfortable (from what I cam remember on seeing you on pictures smiling through the race) and apparently you had a great day. That's what it is all about.

PS: I think that was not your fastest Fling yet...