With only 4 weeks separating the Lakeland 100 from the UTMB I wondered what to do about training, how to keep ticking over without doing anything too punishing. In the end I decided that a couple of 5 milers a week and a bit of hill walking around the middle weekend would do the trick. When I discovered that on August 10th I would be seeing Julia off back to Gatwick from Geneva airport after a week's climbing it all became too clear, the best hillwalking in Europe was on the doorstep, I would just have to do a Tour. About 4 days should cover it without too much stress so I booked a flight home for the 14th. With all the usual TMB paraphenalia, plus a sheet sleeping bag, towel and washkit, enough spare clothes to deal with weather changes and to make the evenings a bit more pleasant for both me and my fellow refuge/gite occupants, sunscreen for 4 days and a couple of maps, I certainly wasn't going to travel light, in fact my sack weighed in at over 6kg, but that wasn't the point, this was to be a walk not a run. And in fact that's the way it turned out; I walked every step of the flats and uphills, and only broke into a shamble on the downs when it was easier than walking, the steeper descents in practice.
Day 1: Chamonix to the Refuge Croix de Bonhomme, 27.9 miles, 9504ft ascent, 9hrs 45min.
I left the faded but somehow still charming grandeur of the Hotel Richemond at 8am on a cloudless morning and was soon off alongside the river to Les Houches with the Col de Voza on the skyline. When I reached the col I still hadn't decided on a detailed game plan. The classic TMB walk skirts the valley side around to Les Contamines, losing no height, whereas the UTMB trail drops way down to St Gervais almost 700ft lower than Chamonix. I pondered over a Mars bar, then made a decision. I would follow the UTMB trail in its entirety - at least that meant I wouldn't have to make any more decisions.  I set off up to the Chalet at La Charme, then down the 3000ft drop through the treelined ski area to St Gervais.

The reward was the beautiful Sentier de Val Montjoie all the way through woods and pastures along the stream up to Les Contamines, where I sat eating a late lunch at around 2pm in the town square. But there was till a fair way to the Bonhomme col, gentle for the first part up to La Balme, then tougher up to the top
In the UTMB race all this territory from La Charme to the Bonhomme and beyond is covered in the dark, so it was a real joy to see it all in daylight. From the Col de Bonhomme the trail traverses the ridge to the left, slightly rising again to the Croix de Bonhomme refuge at around 2500m altitude. I reached the hut at 5.45pm, plenty of time to carry on down to Chapieux but I like being in the mountains rather than the valleys so I checked in for the night, feeling that I'd earned my dinner.
Day 2: Refuge Croix de Bonhomme to Rifugio Elena, 32.6 miles, 9715ft ascent, 12hrs30min.
This was going to be my big day as I was aiming for the Elena right from the start. I was first out of the hut at 7am and down the long descent to Chapieux. This is tricky at night because it's steep and in many places there are numerous pathlets rather than one clear trail, but in the daytime when I could see both the detail and the bigger picture at the same time it was a real cruise and I was down in under an hour, just about coinciding with the general leaving time at Chapieux. It's 3000ft from here up to the Col de la Seine, but the first 1000ft are done on a traffic-free road  - traffic-free that is apart from the donkeys which seem to be gaining popularity as a means of carrying your bags while walking the TMB!
The climb to the col itself is steady but with a very smooth track and goes quite quickly. I was greeted on top by a chilly wind  - I've been up there half a dozen times and never known it different. For some reason I decided to take a photo of my sack at the summit cairn, after which my camera kindly informed me that its memory was full, so that was it  - and I hadn't got to any of the spectacular views yet! 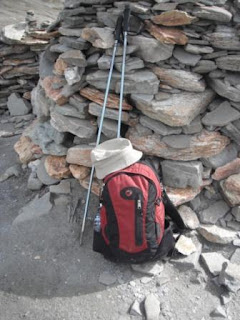 What a great trip and superb preparation for UTMB.

Sounds like the race will be a stroll in the park, Andy! But don't be lulled into a sense of false security......

It must have been interesting, and a bit strange, doing all that Bonhomme and surounding area in daylight. I hadn't realised they got daylight there, just kind of assumed it was always darkness.

And your pays des vaches seemed to kick in @ Flegere; I guess 'cos of all the folk milling around, and the loss of the ambience of it all. That would seem to be a bit premature for the pays des vaches to kick in during the race. That's more likely to be when you've done the descent from Flegere.

I wonder how your race write-up will compare to this write up? Same route / terrain / views; just the detail that may be different. Hope you enjoy the race as much as you enjoyed this journey.

Great report. That's the weather we wanted last year! If and when we enter the UTMB/CCC again we will also spend a few long weekends on the actual trail before. I am already looking forward to this. Best wishes for the race.

A really mouthwatering read. And the perfect "training" although calling it training does not do it justice. For the ordinary walker you have done the whole thing now. Why race it? What's the rush? So they may ask.

We will be back !

Excellent report. Look forward to meeting you in Chamonix.