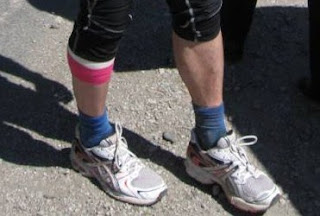 It's been going on about a couple of years this thing but I try to ignore it except when I put the tape on and sometimes get a raised eyebrow when it's pink because they've run out of black like at last years West Highland Way Race when John was saying how do you expect to get ninety-five miles when you're limping across the carpark at the start and I say it's going to be OK and it usually is. I'm working on the Joss Naylor principle that when something ails you, you've just to put it to the back of your mind but nowadays it wants to come more to the front of my mind or at least to the side of my knee. So I go along to Karen the physio who has helped me out of a few jams in the past but she says sorry I can't help you this time you'll have to go back and see the Man so I make the appointment.
He says hello I haven't seen you for quite a while things must have been going OK and he's right because he hasn't peered into this keyhole for nearly ten years now but he still wants to know why I'm back of course so I tell him I do a bit of running these days and it's starting to hurt. He questions me and pulls and twists a bit and says these are still pretty good knees really but we'll get a scan how about later this week and then I confess that I'm going ski-ing tomorrow. He doesn't look at me sternly or anything like that because the Man is a skier too and he understands so he says have a good time and see you next week. But I take his note around to the scan people anyway and they say we can do it now if you like so I spend forty-five minutes dozing in the tunnel while it bangs and slurps and then I'm done. 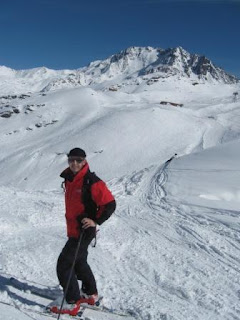 Then I pick up my children who aren't children at all by now and we leave behind our various jobs and better halves and common sense and go to the mountains where we've been for more years than I care to remember now to have fun in the snow. Only this time I say you'll have to go easy with me for I am an old man and I have a knee so we spend the first hour or two making pretty turns on pretty pistes and have vins chauds on the terrace like proper skiers. But it can't last of course and we soon see tempting tracks dropping off somewhere and sidling round somewhere else so we drop off and sidle round and Julia and I discuss what we have come upon, the slope looking rather steep but the snow looking good and we can't see any rocks then John explodes past us all power and flying snow and casual elegance the way he always is and he's fifty yards down the hill before we can say maybe so it isn't maybe any more and we launch off after him. We squish and twist and bounce and arrive all together at the bottom with burning legs and gasping for breath and grins wider than wide as we remember for another year why we come to these places. So in two days of sunshine we ride lifts and ski slopes over most of Meribel and Val Thorens getting back in the evening with aches and memories and eating big dinners and drinks and coming back for more tomorrow and my knee is still there but Joss is winning and that's good enough for now. 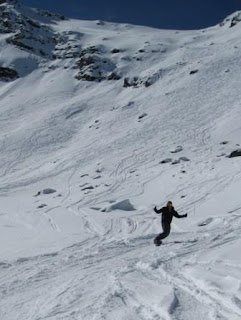 On Saturday evening we sit in a French bar with French people and drink French beer and watch French and English rugby players doing their best stuff which is exciting but slightly unnerving at the same time if you know what I mean but no-one is disgraced and at the end there are shrugs and smiles and general agreement that we have witnessed a bon match. Then we look outside and see that it's raining and we think the third day of our three will be completely washed away but John says it will be OK we must get up early. So we breakfast at seven thirty and it's still raining exactly like last night but John says trust me it will be OK so we dribble off round to Courchevel 1300 which has trees so you can see in the fog and a long slow rattly old lift and when we arrive at the bottom of the lift there is almost no-one about and the rain is now snow then at the top of the lift there is still almost no-one about and the snow has stopped and there is no fog and a foot of fresh snow everywhere and John doesn't need to say it will be OK because he knows he was right all along and it is going to be very, very OK. 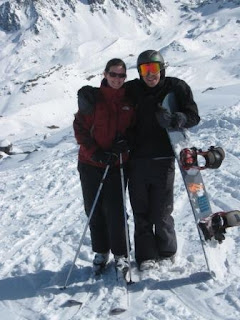 So we spend a long morning damaging as much new snow as we can find and slowly more people come because they have realised that it's OK but now it's nowhere near as OK because they're too late and we leave them what's left and start the trek back to Geneva and home. We're all tired coming off the plane but we know we'll be back next year and John's on his iPhone and saying I shouldn't tell you the Liverpool result so I know the honeymoon is over but you can't have everything.
Monday I go for a run in my forest and feel no knee but it's all fairly straight and flat and I know I have to see the man again on Tuesday. There's no major damage but another bit of cartilage is come loose but sitting in a good enough place and not causing problems and not causing the pains which may go away eventually but ups and downs and twisty bits are still likely to be uncomfortable for a while he says if it was my knee I'd leave it alone for now and it is my knee so I go with his advice thinking I'll have to rely on Joss a bit longer and he says if it really gets worse you know where I am. In the afternoon I run up my hill three times and it's not so bad and I think time to stop worrying about these things now five hundred miles of racing starts with the Hardmoors in less than three weeks just go with the flow and enjoy it. I think of John and the snow, trust me it will be OK.
Posted by Andy Cole at 00:06

Fantastic writing, Andy. We are not worthy.

If not now, when?
I've bookmarked this one to re-read when the doubts and fears get in the way of getting on with it. Like they said - cracking blog.