Maybe it's just me but running sometimes seems like a funny old game. One day it occupies most of your waking thoughts and the next you just don't want to know.  I was happy enough on finishing the reorganised UTMB race at the end of August, but afterwards I just couldn't seem to get going again, so I've taken the whole of September off. No runs  -  well just one but I'll come to that later. I cancelled my entry for the Brussels marathon in early October and set about doing other things.
After the TMB Jan and I stayed on in Chamonix for a week, walking trails we have known for many years in the now perfect weather, with views that I'm sure can't be bettered anywhere in this continent. 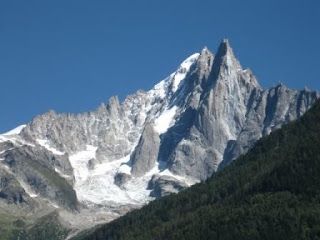 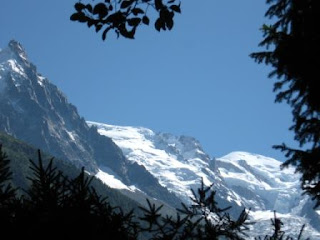 Typically for Chamonix they even have a "garcons de cafe" race (each waiter has to carry a tray of drinks and not spill a drop or they are disqualified!) before the end of the season............ 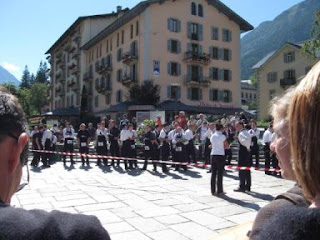 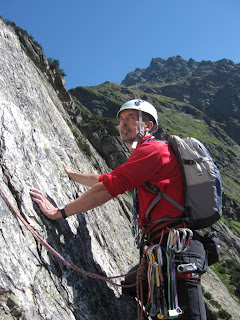 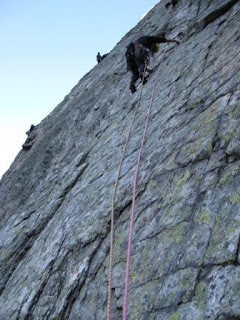 I started to think a bit about running again, and we had times when I could have gone out but I still somehow never got around to it.
So I came home and spent an annual 3 days in the Lakes with some old school friends, people with whom I first walked the hills fifty years ago; we had some beautiful days over Crinkle Crags, Bow Fell and Fairfield, great evenings in the pub afterwards and are already looking forward to the same time next year. 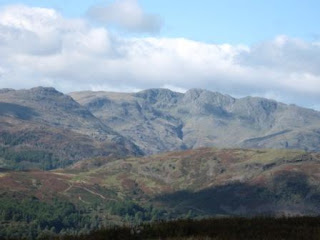 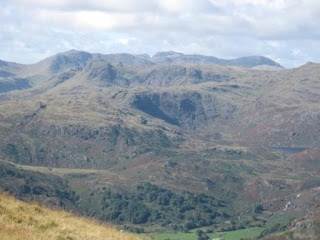 And then near the end of the month I took myself over to Yorkshire to meet the man of Steele and help out a bit with the Hardmoors 110 race.  Marshalling at Bloworth Crossing was my little task, so I followed in the year-old footprints, or maybe that should be tent-prints, of the peerless Murdo tM to set up my stall on the moors late Friday evening and wait for the runners to appear. 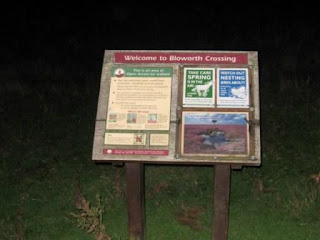 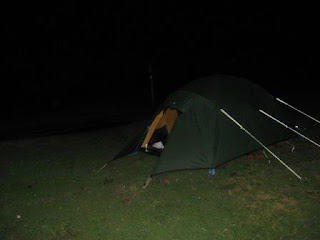 It blew all night and rained pretty often, turning what is already a very tough event into one of some attrition. Thirty competitors started out from Helmsley and twenty three made to my checkpoint thirty-seven miles in. I was surprised there were so many. They all seemed cheerful enough but several more dropped out at Kildale, six miles further down the track directly into the teeth of the northerly gale. With the sweeper through at 5am I could settle down to some sleep before packing up and walking back to my car in time for a late breakfast. I had agreed to marshal again at the finish so on the way I called in at the wonderfully situated Whitby checkpoint in the Abbey grounds, previously the fiefdom of Transylvanian Mike, where I was welcomed with tea and chat by Mrs MacPirate. We had assumed that those who made it across the moors in the rain, wind and dark would find some respite down the coast in brightening weather with the wind now behind them. By the time I got to the finish at Filey a very different picture was emerging. The wind veered and the rain returned presenting runners with a vicious crosswind and driving spray at any point that they weren't well above the sea. One of the most serious obstacles on the whole route was Scarborough sea front at around the hundred mile mark, impassable due to the height of the waves, forcing runners to find a drier alternative up in the town. Andy Dubois' winning time of  22hours38 was a class performance in the conditions. 11 competitors won through to the end, the final one being the indefatigable John Vernon completing his fifth hundred mile race in as many months. I enjoyed the experience and thought I might have a go in the future, the weather surely can't be as bad again............can it?
But I did put my trainers on again once in the month, on the 19th.  Newcastle's Great North Run has been a family tradition for us for seven or eight years now, Jan, Julia, and my brother Nick were all registered to run, the hotel was booked, so I went. I wasn't sure how to run. From previous results I had been allocated a start position very near the front (sounds impressive, but I think the first batch covers anyone who can get under about 1,40!), so in the end when the gun went off I just went with the flow. I didn't look at my watch until about ten miles, and by then I couldn't do the calculation to work out what it meant so I just sidled on to the end, running as hard as I could without feeling uncomfortable (well, the band, beer and burgers at the end always make it all worthwhile). I hadn't got below about a nine minute mile in the two or three months previously so I was pleased to get home in 1.37.34, within three and a half minutes of my PB.  The family all finished ok. 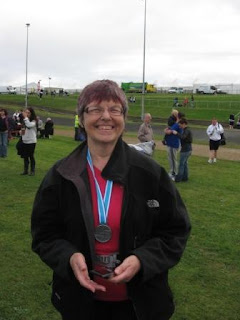 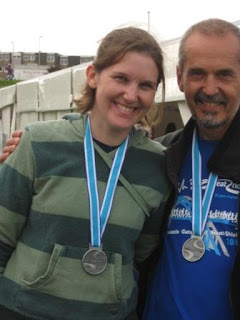 It was probably a bit of a daft stunt and my hamstrings were still tight a week later but I avoided injury and enjoyed the run. It made me think a bit. I do read so many tales of enthusiastic people wanting to run who can't because of injury or illness or time constraints and so on. I'm very lucky to be able to do what I do. There's the Snowdonia Marathon, mainly a road event but with I think about 2000ft of ascent to make it interesting and in stunning country, coming up in just over four weeks time.
Tomorrow is the first day of October. I'm going to start running again.
Posted by Andy Cole at 21:30

Glad to hear that you survived marshalling @ Bloworth xing, Andy. A bleak 'n lonely spot, and that's when the weather is fine. Its just as well none of the runners decided to pull out of the race there. Fitting anyone into your wee tent would have been a tight squeeze. Maybe that's why they all decided to soldier on to Kildale, however much they were enjoying the HARDmoors experience!
;-)

Good on ya. Enjoy the rest of the year. Maybe you should start entering score class on mountain marathons to spice things up a bit?

It was great to see you and share a cuppa.
Glad you made JS go for a snooze and came back at the end of my stint.

Wow! 1:37 on the back of no training! Impressive, mate. There must be something in this not training lark.

no wonder you haven't done any running, you've barely any time to fit it in with all that walking and climbing! Anyway, they say rest is a good thing... i'm going to get some too when i grow up ;O)