I wanted a last solid day in the hills before leaving for Chamonix and the TDS; I'd done enough miles on forest tracks for the week already but I needed a bit of serious height gain, so I decided I would have some Snowdons.

Now Snowdon is a maligned, overcrowded, rather desecrated old heap of stones but I still love it. Like Mont Blanc in its own way, it has everything  -  one of the best climbing crags in Wales at Clogwyn Du'r Arddu ("Cloggy"), the high Trinity face which holds good snow most winters, and about ten largely independent footpaths to the summit - broad tracks for easy running, rocky scrambles, knife-edged ridges, grassy cwms, something for everyone. And just an hour's drive away, I can't complain.

The forecast was good for a change, the alarm went off at six, but I loitered in bed and lingered over breakfast, so it was past eight o'clock when I finally tumbled out of the car in Llanberis.  No early starters today, a bit of activity at the railway station but no-one on the track yet.  I eased into a steady pace for the first few miles to the summit. As went I thought about the food experiment I was going to make. I read Stuart Mills' blog about his winning run in the Lakeland 100 a few weeks ago, and it seemed that he ate very little so I asked him about it. His theory is that if you're running at a demanding pace (say in a marathon) then your body needs carbohydrates, but if you're going much more easily as you do in an ultra it will switch to consuming fat, of which we all have plenty. If our "intelligent" scales at home are to be believed I have about 20% body fat, about 14kg, well that should be good for 500 miles at least so using up a bit of it going up Snowdon should be easy. So I had taken just one or two gels for emergencies, otherwise just water.

It was a treat to be on this track, usually so crowded, on my own on a sunny morning, the miles drifted by 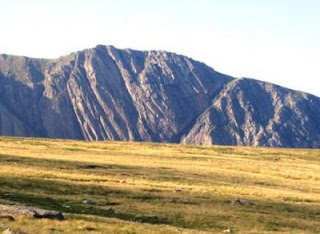 Cloggy from the Llanberis track in the morning sunshine 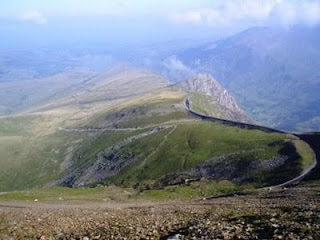 Looking back down the track towards Halfway House and Llanberis

and I was soon on the summit. Off down the Miners' Track, usually considered the easiest way up from the Pen y Pass side, although its initial descent is every bit as technical as the far superior Pyg Track, but it has the advantage that once down this first bit it's an easy run all the way down to Pen y Pass. Into the cafe to top up water and my no food strategy was immediately blown. The place had been poshed up a bit since my last visit, and the array of cakes on the counter was just too tempting. I'll have one of those I said, pointing at a thinnish scone-looking affair; they come in twos said the lady serving, with butter and jam. So that was that but I did feel a little slowed down starting out again.

Next objective was the classic "Snowdon Horseshoe" round, up over Crib Goch and Crib y Ddysgl and down over Lliwedd. The 2000ft from Pen y Pass to Crib Goch looked big, come on, just get stuck in, there's a 2000ft climb round every corner on the TMB, so it was done. The morning was wearing on as I threaded my way though the traffic on the Crib Goch ridge and pinnacles. The crowds were friendly, everyone prepared to wait a second or two when it was clear I was going faster. I've been coming along here for at least 45 years so I can remember pretty well every hand and foothold by now, but it's always an entertaining stretch. 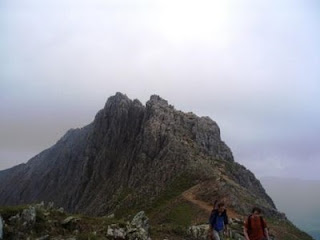 Looking back over the Crib Goch pinnacles

The only mist of the day caught me on the final ascent to Snowdon summit, which by now had succumbed to the normal Sunday lunchtime human battering, so I wasted no time in heading off down the first nasty 1000ft 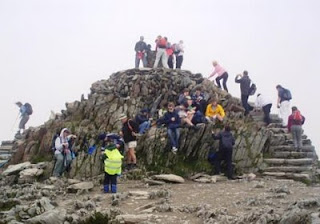 of the Watkin Path and out into the sunshine again. This second half of the Horseshoe always seems less crowded than the first, I guess because quite a lot of people don't quite know what they're taking on and bail out at Snowdon. Anyway the climb up to Lliwedd and descent that follows are a real pleasure in the now warm sunshine. 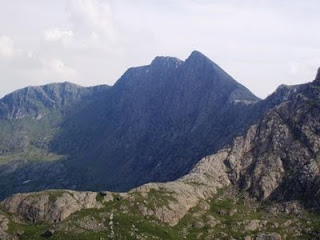 Lliwedd from the Pyg Track

As a one-off I would be trying to get as close as I could to three hours for the horseshoe circuit, but as part of this longer day I'm happy to be back at  Pen y Pass in three hours forty minutes after leaving. I know I'm a failed experimenter now, and the cafe gets hit for a cup of tea and a flapjack this time. I've planned my trip to avoid too many of the "haven't I seen you before today" comments you get when doing laps on the same mountain, but I do get one or two on the next stretch back up to Snowdon via the Pyg Track. I think this is one of my favourites, a long balcony with wonderful views over the lakes below, while at the same time a good enough surface to keep up a reasonable speed without having to think too hard. 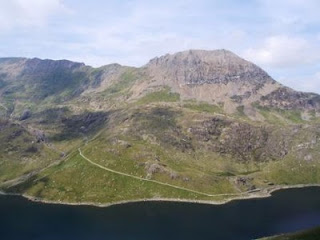 Crib Goch, with (top to bottom), the Horseshoe, Pyg, and Miners Tracks

Just as I emerged from the top of the zigzags to join the Llanberis track for the final five minutes to Snowdon summit I was passed by an uphill train, the hundred year old steam locomotive giving its all on the final steep incline. A stirring sight and sound, a million miles from the diesel drone that follows most trains on Snowdon. And the smell, that smell that you only get from steam, immediately bringing back childhood memories of trips to the seaside before cars figured much in the average person's life. If you really have to have a railway up a mountain, it ought to be memorable.

Back on Snowdon there was decision to be made.  No more easy options to Pen y Pass, next descent has to be 3000ft plus. Did I have time for one more ascent and two descents? Without really making a decision I headed off South-Westwards. At the junction I looked at the start of the South Ridge knife-edge, easier and less crowded than Crib Goch but somehow more elegant; no, that would lead me down to the Gwynant valley and a definite return in darkness, for which I had no torch. So I sloped off right down the long gently descending track to Rhyd Ddu.  Another fine route this one, dotted with families who know they can do it and want to get away from the hordes coming up from Llanberis. A gentle jog all the way to the village. The Cwellyn Arms was almost too tempting, but I still had ground to cover and settled for a swift half of coke and a packet of crisps. 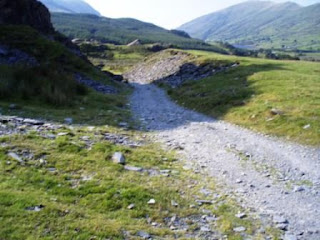 Down the road a mile or two to the start of the Snowdon Ranger track. This starts with the best uphill of the day; long easy zigzags, compact smooth gravel underfoot, perfect angle, the sort of ground where you can really feel the four-wheel drive effect of the poles. TMB land in Wales. But about a third of the way up I had to take stock; if I carried on it would be dark or very nearly for the last few miles of descent, why turn a nice day out into a possible epic? So I turned off left, up over an easy grassy climb to a place that my generation will always refer to as the "Telegraph Col", though the posts from which this name came are long gone now. At 1550ft it saves me nearly 2000ft of up and 4 or 5 miles. The route down to Llanberis is a perfect balcony track down a lonely valley, even on an August Sunday; in the past it's been for us a mountain bike single track blast when the mood took us, or a walk from the hut in Llanberis over to the Cwellyn Arms for lunch on days when the weather permitted nothing else. This evening it was my get out of jail card, and I ran steadily all the way down to the town.

Back at the car, my Garmin said just over 31 miles and just under 13,000ft of ascent. Good enough. I ran out of time, not energy. And the two scones, one flapjack, and a packet of crisps kept me going, I was never hungry. I'm going to re-read Stuart's stuff, and although I still think a bit of regular carbohydrate input is good, I'm now more convinced that he's on to something. I never went particularly fast, I just kept going. Ready as I'll ever be for this year's Chamonix experience.

Great run and pics Any, made me quite envious. I'll miss Chamonixthis year but will be thinking of you. New race (TDS isn't it?), and a good one by all accounts. All the best with it. Say hi to Jan.

What a great day out!

I've done the Snowdon Horseshoe a few times and I love it.

I'll be very interested to read how your nutrition goes on the TDS.

Make sure you keep a record of all you eat and how you feel!

Have a great time.

What an awesome place to go with. I am looking forward to reach that place too.