Half marathons aren't really my thing; seven minute miles hurt my hamstrings and I'm always puffing before half way, but family and friends turn up for the Great North Run every year and we're never disappointed, it's a brilliant day out.

9.30 Sunday morning and we converge from all over the town, you never need to know the way to the start of the GNR, just follow the line of runners you'll come across at any Metro station, road junction, or bus stop. The Cole team meets on the footbridge about halfway along the dual carriageway that forms the start, from where we can see runners assembling for what seems like miles in either direction, bringing home pretty dramatically what a start of around 50,000 looks like. Good luck hugs and we're off to find our start positions - son John and I will get through the start line about 2 minutes after the gun goes off, but for daughter Julia and John's partner Jade it will be around half an hour later before their run starts! My brother Nick and two of his children Laura and James are in the field somewhere somewhere but we haven't seen them at the start so not sure where.
Off we go, beautiful start, slightly downhill through the tunnels to the "oggi, oggi, oggi" shouts from everyone, then out onto the Tyne Bridge, crowds thick everywhere. My sixth time here, it's a hilly course and today it's hot, you're never going to do a great time but that's not what it's about, it's the people of Tyneside who make this event what it is, cheers and a hundred additional unofficial food and drink stations all along the way, and live music at all the places you really need it. Up the first short hill past Gateshead Stadium, down a bit, then the long climb to the highpoint of the course around five miles, finally it levels out for a bit. I pretend that I can keep pace with John but after around seven miles I have to admit defeat and he swooshes off towards the finish. I can relax a bit now and enjoy the day in the sunshine, run through all the showers, exchange high fives with the kids along the way. It's still hard up the last long hill from mile ten; where's Elvis, I know he'll be there just before the top but he's a long time putting in an appearance today, at last there he is, give him a wave, crest the hill, a final little dip and up, and there's the sea. Down the steep little hill and left for the final mile along the seafront, into the cooling breeze, know you're home now. Always impressive, the crowd noise along the final half mile today is deafening, this must be what it's like for real athletes, then through the finishing arch and make for the bottle of water. 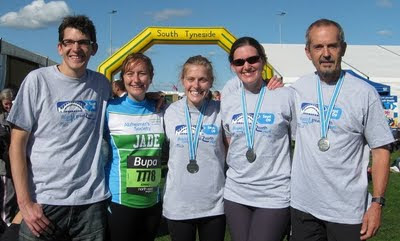 As each of us finishes, our little group gradually reassembles outside the beer and food tent (where else?) with our stories of the past hour or two. The burgers, perfectly ordinary, are the best we'll taste for a long while, then we lie on the grass in the warm sunshine, watch the Red Arrows do their amazing stuff overhead, listen to the band work its way back from the sixties, and let the afternoon melt away. When most of the crowds have gone we saunter off down the prom to the Metro and home.
This is not running over the emptiness of an open moor or romantic lochside, but in its own way participative sport surely doesn't get any better than this. Times? Well, none of us either impressed or disgraced ourselves, beyond that who cares? We all had a lovely day.
Posted by Andy Cole at 18:37

Sounds like a crackin day out.
Well done one and all!!